My eventual goal: to build a simple a simple Tellurion, an Orrery which shows the relative position of the moon around the earth as the earth revolves around the sun.

This will be a series of blog posts, documenting the good, the bad and the ugly.

For me the first step is to fire up Kythera and design the gear chain that controls the motion of the moon around the earth as the earth goes around the sun. (Now many such Orreries show the rotation of the earth, but we’re going to skip that for now.)

Ultimately we want a gear chain that then allows us to rotate the moon around the earth relative to the earth moving around the sun, with both moving in a counter-clockwise relative motion:

So here’s a question: what’s the relative motion we should use?

Well, it takes approximately 365.25 days for the Earth to move around the Sun, relative to the fixed stars around the solar system. And it takes 29.530 days between new moons–which means it takes that long for the moon to rotate to the far side of the Earth.

This means that there are 12.368 746 34 passes of the moon per solar orbit–which agrees with the Wikipedia article.

Lets find a gear system which does this.

So, opening the Kythera Gear Calculator screen, we enter our target fraction: 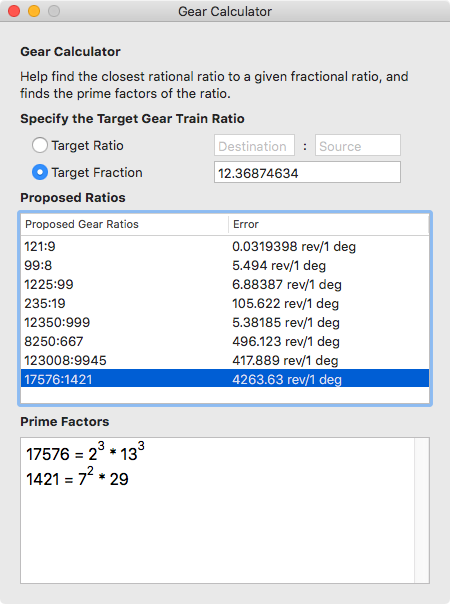 There is an interesting ratio, which is extremely accurate, with some very interesting prime factors at the bottom of the list.

Since we need an odd set of gears (because we want both the Earth/Sun arm and the Earth/Moon arm to rotate counter-clockwise), the last gear ratio turns out to be a very interesting ratio, because the top prime factor 17576 = 263.

A little fiddling later, and I came up with the following gears:

Some fiddling later in OpenSCAD, and we come up with the following model.

All the files are attached here: EMOrrery2.zip.

And the gears are out of the FormLabs Form 2 printer. Right now I’m printing the rest of the components, and we’ll see how this works out.

Ultimately a mechanism like this needs to be cut using brass gears; that’s how you get the lovely appearance and the lovely movement and beautiful presentation seen in commercially available Orreries. But the beauty of using a 3D printer is it makes prototyping fairly quick and easy.

How well this works out, I’ll know tomorrow.