This is a series of articles I’ve intended to write showing the creation of a basic 3D graphics pipeline on an Arduino. By the end of this series hopefully you’ll have a good understanding of basic 3D graphics, including coordinate transformations, rendering and perspective rendering.

Of course, if you want to write software for an Arduino, you need one.

For this series of exercises I used the Adafruit METRO 328, which can be had (as of this writing) for $17.50. You can also use any other Arduino or Arduino clone, but you may need to fiddle with the settings.

I also used the 2.8″ TFT Touch Shield for Arduino. The advantage of all of this is that we can simply plug the two parts together, plug it into our computer, download the Arduino IDE, and we have a basic development environment.

Adafruit also does a very good job integrating with the Arduino IDE, providing libraries that can be quickly downloaded to test your display. And they provide a great on-line tutorial to get you up and running in just a few minutes.

Of course by using these components we create a dependency on their libraries; if you decide to use a different display shield from a different company you’ll also need to make a few changes in our code to make it all hang together. We’ll talk about that when we get there.

When you get it all set up, you should see a series of test screens. 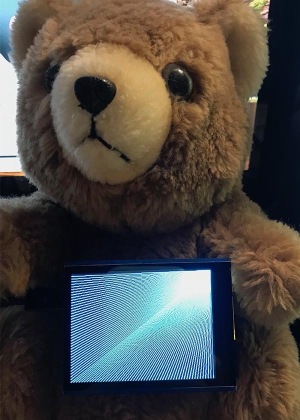 The reason why we call this a “graphics pipeline” is because we’ll break the problem down of drawing 3D objects into a series of steps–a “pipeline” where we do a small but well-defined unit of work at each step along the way.

By organizing our drawing as a pipeline we simplify each step of the process. Each step may not do much, but when added together we can create incredible things.

So let’s get started.

At the very bottom of our pipeline is the code which draws directly to the hardware. For this we will rely on the Adafruit GFX library to actually handle the drawing–but we still call this layer out because it is the only point in our code where we talk to the Adafruit GFX library in a meaningful way. (Our code on construction interrogates the library to get the screen size, and we expose the start and stop drawing methods and color methods–but that’s it.)

Our primary line drawing for the first part of our 3D pipeline is the ‘movedraw’ method. This contains all the logic for moving a virtual pen to a given location, or drawing from the current pen location to a new pen location.

We use this ‘pen’ drawing model because it allows us to keep track of the state of the current location; this comes in handy when we do our 3D calculations or our line clipping.

So let us create our 3D graphics class. First, we need to set up the constructor and the destructor to initialize and shut down our 3D pipeline, as well as entry points for setting the current color and for starting and stopping line drawing.

The three routines shown in red are test methods; we will replace them when we build the next level of our graphics engine.

Now let’s add the internal state we need to track, as well as our constructor and destructor. We want to keep track of our drawing library as well as the screen size and color:

Our constructor and destructor simply notes the width and height of the screen as well as the drawing library:

We also want to build the begin and end methods. These call into the Adafruit GFX library to start and end drawing to our device. The reason why we do this is to optimize drawing; we don’t want to unnecessarily start up and shut down communications to our hardware every time we draw a line.

Our setColor method can be handled inline above.

Now all of this so far has just been plumbing; creating our class and tracking state.

Our p1movedraw method needs to keep track of the current pen location, as well as if the last time we drew something if we moved to that location or drew to that location. So let’s add the additional methods needed to handle moving and drawing:

The internal variables p1draw is true if the last time we called we were drawing a line. The values (p1x,p1y) is the pixel location of the pen. We have an initialization method for our drawing, as well as our p1movedraw and p1point methods which either moves the pen or draws a line, and which plots a single pixel point.

With our methods defined for our level 1 code, we can add our initialization method to our class constructor:

And our test methods simply call into our internal drawing routines:

First is initialization. Our initialization routine should set our system to a known state; in this case, we move the pen to (0,0). Recall that the variable p1draw is true if we drew last, false if we moved.

Our initialization code then sets everything to zero:

Our point drawing does not move the pen; it simply sets the pixel. This is a simple wrapper into our Adafruit GFX library to write a pixel:

Note: We call the ‘writePixel’ method rather than the ‘drawPixel’ method because we are calling the ‘startWrite’ and ‘endWrite’ methods inside a ‘being’/’end’ pair.

And our move/draw routine will draw a line only if the pen is down; we then update our current state.

Note that this is the place we would need to change our code if we needed to draw our own line using Bresenham’s line drawing algorithm, or if we needed to create a draw list to send to a piece of connected hardware.

We can put all this together with a simple test:

And if all works well, we should see: 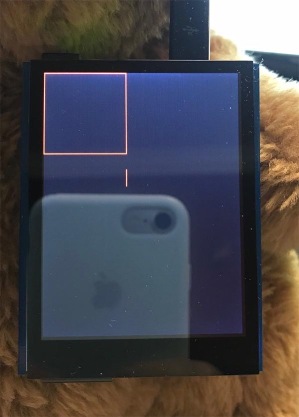 Okay, it’s not much. But you have to learn to crawl before you walk.

Now this is rather boring. If this was all we wanted to do, big deal.

But remember our original principle:

Each step may not do much, but when added together we can create incredible things.

The next step in our pipeline is viewport drawing.

The purpose of viewport drawing is to abstract away the pixels. That is, what we want to do is to redefine our drawing coordinates so that we get more or less the same drawing regardless of the dimensions of the physical hardware attached to our Arduino. And we do this by defining a new viewport coordinate system that ranges from -1 to 1.

Note: We will be using floating point math for our operations, which may not necessarily be the fastest on an Arduino. However, it should be fast enough for us to do some simple things like rotating a cube. When designing for an Arduino, the most important thing you can do is figure out what not to draw; that way you can avoid doing math for stuff that is not visible.

Now our virtual coordinate system imposes a virtual square; the top and bottom of our screen (or the left and right sides depending on the orientation of our screen) has a smaller coordinate value:

This means we have a little math to do.

Basically we need to figure out two things when our 3D class starts up:

Things get particularly interesting on the fringes. Note that when we round from a floating point value to an integer, we generally truncate (or round down); this means the value 12.75 becomes 12 when converted to an integer. So we can’t, for a screen that is 320 pixels wide, write:

So we solve this problem by bumping the width down by 1 pixel, and we calculate our pixel range (in floating point values) from 0.5 to 319.5. (This will then convert to integer values from 0 to 319.)

We have a second problem in that in our pixel coordinates (0,0) is in the upper-left corner of the screen–but we want our drawing to put (-1,-1) at the bottom-left. This means we need to flip the sign of the y value during our calculations:

Our third problem, of course, is that our display is not square; it’s rectangular. But we assume our pixels are square. And we assume whichever is larger (the width or the height) will map from -1 to 1; the other wide will map from roughly -0.75 to 0.75 or so.

This implies our scale value B and D which we multiply in our equation above is the same. (If our pixels are not square we need to do something different.)

So let’s put all this together.

For our viewport coordinate system we need to track five variables: two giving the (+/-) width and (+/-) height of our viewport:

And three that handle the transform: the amount we multiply and add to our viewport coordinate to give our pixel coordinate:

Of course we also need to add our level 2 pipeline code.

Notice we also change our test routines (shown in red).

Our p2movedraw and p2point routines look similar: they perform our math calculation using the constants we’ve calculated during startup to transform from viewport coordinates to pixel coordinates:

Now the heavy lifting is in our initization code, which must find all our constants given the size of the screen. As we noted before we assume pixels are square.

Our initialization code first needs to set up some constants and find the screen dimensions for our clipping method. We then need to calculate the scale parameter and ultimately the offsets. In the end our code looks like:

Of course we need to change our main Arduino test code to use the new floating point values for coordinates:

And if everything works correctly, you should see the following: 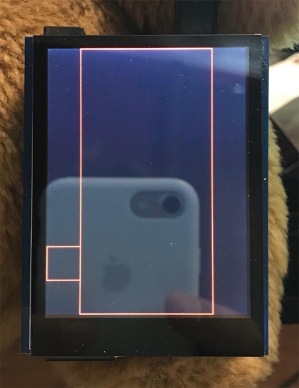 Again, not all that exciting.

Except for one thing: This is what your image will look like regardless of your screen size. This becomes important as we move on and start building our 3D rendering engine.

All of this code is available at GitHub in a separate branch.