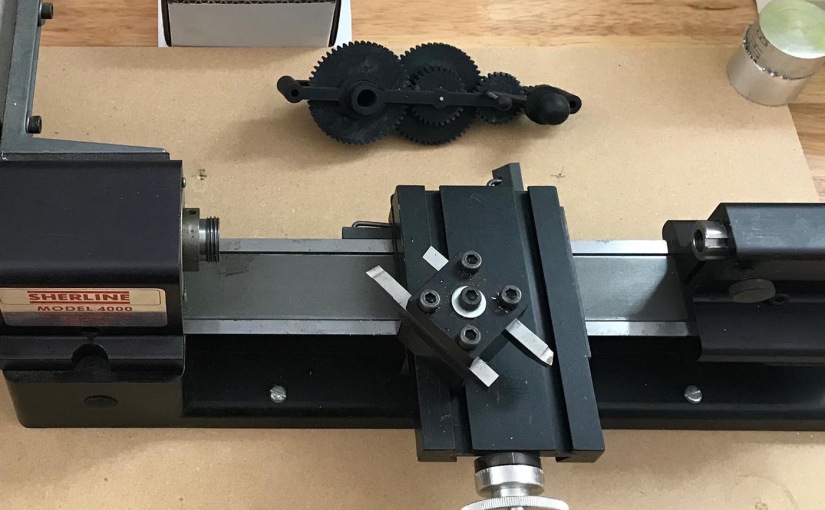 First, let me observe that I’m fascinated by all things which calculate. That means computers, of course–from a desktop computer to mobile devices to Arduinos and other 8-bit computers. But that also means wiring transistors which can calculate things, and that means mechanical calculators: Orreries, Tellurions, mechanical adders–all of these things fascinate me as well.

It’s why I’m putting together a video series on digital computers, building one from the ground up, from transistors.

And it’s why I’ve been slowly accumulating the stuff necessary to cut gears–so I can build my simple Tellurion, which I 3D printed earlier this year.

Now if you do machine shop stuff, if you know how to use a lathe and a mill in order to cut metal–well, I’m sure the next section here is going to be pretty cringy. Because I don’t know what I’m doing.

We all start from ignorance, and learn through experience.

So let’s go through the steps I performed today, and why I only have the broken bits of a gear to show for my efforts.

First, starting with a 1/8th inch thick sheet of aluminum (because I want to practice on something relatively cheap before I destroy a whole bunch of expensive brass), I used a DeWalt scroll saw, and some Pike Jeweler’s saw blades and rough cut a 1 inch disk of aluminum. I set the scroll saw on the slowest speed it would do–the theory that it would be easier to allow the machine to move the blade back and forth than to do it by hand.

I went through four blades before I stopped breaking them; the trick is to allow the blade to do the work rather than force it. (Fortunately the blades come 144 to a set. Unfortunately the bloody things are so microscopically small I had to use a hand magnifier just to identify which side had the teeth, and to figure out the orientation of the teeth. Hint: if you lightly rub your finger along the side without the teeth, it’s smooth to the touch. Along the side with teeth, it should ‘catch’ when your finger is running upwards; that means the cutting motion will be downwards as the blade moves down through the hole in the table.)

Once I got a rough blank, I then super-glued it to my super-glue arbor made a couple of months ago.

And this is where things went south: I didn’t properly center the disk on the superglue arbor. Had I had used a tail center and the tail stock to hold the wheel in place as showed in this video, then I would have things centered correctly.

Live and learn, so I took the arbor and wheel out to the driveway, heated the whole thing up with a butane torch, and tried again.

As an aside, I’m cutting a 29-tooth gear that is slightly less than 1 inch in diameter. And for this operation I’m using a Sherline lathe to turn the gear. Yes, I could use the 7″ lathe, but for smaller parts I wanted to try the Sherline that I inherited earlier this year to see how well it works out.

I managed to turn the wheel down to the “correct” diameter (*cough*) without any real incident.

Next came mounting this on the mill to cut the gears.

So what I’m using is a Sherline mill which I inherited (but which had some rusted pieces I needed to fix). To that I’ve added a CNC Rotary Table Indexer (because hey, 29 teeth), a tilting table set at 90 degrees, a mill cutter arbor (specifically part #3236 for 1″ diameter cutters), which holds a 32DP gear cutter from these guys.

Of course this process requires that I detach the 3 tooth jaw from the lathe and attach it to the rotary table–and I’m sure there are a bunch of machinists out there who are saying “no, no, no!” because once you detach something from the lathe, it will never ever center again.

Like I said, I’ll be the first person to confess I don’t know what I’m doing.

However, in this case, it appears to work since the 3 tooth jaw screws onto the lathe and screws onto an attachment on the table–so it’s “centered enough.” At least I hope it is.

Now of course my second mistake was to put the rotary table on the right. The gear cutter spins so it cuts from right to left–which means it is putting pressure on the back side of the gear, essentially “pulling it” off of my superglue arbor.

Which–six teeth into my cutting process–it did, throwing the gear part ways across the room.

The results… well, they’re not pretty.

I haven’t cleaned the superglue off the back; that’s the rings. The gear teeth are not quite right; turns out I turned the wheel down to the wrong diameter. (I turned it down to (29+1.5)/32 inches OD, on the theory that “if it rattles it runs”–but I think I should stick to the tried and true first and if I fudge the OD, perhaps fudge it more like by 0.005 inches and not by 0.015 inches.) And of course my little coin-sized gear is pretty rough; I didn’t bother cleaning it up because after this picture it’s going into the scrap bin. 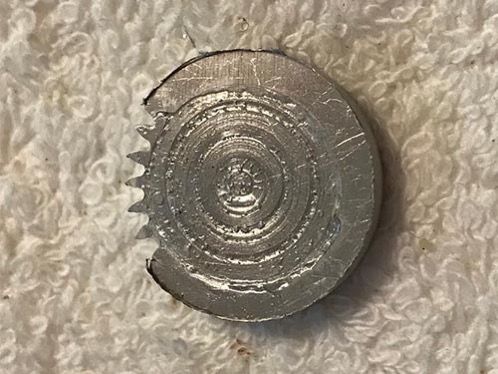 But it did mesh correctly with a 32DP gear I bought from SparkFun. And it undeniably proves I’m at least on the right path.

I'm a software developer who has been writing code for over 30 years in everything from mobile to embedded to client/server. Now I tinker with stuff and occasionally help out someone with their startup. View all posts by William Woody