It probably doesn’t help that I have no idea what I’m doing. Though I do have all my fingers and toes. So there’s that.

So today, after getting the M3 to M2 adapter, the M2 to Sherline adapter, and hooking up the Sherline 4-jawed chuck to the larger 7″ lathe, I went to round the blanks and get them ready for gear cutting. (While gears smaller than about 32 teeth or so make sense cutting on the Sherline, anything bigger than about 48 teeth just cannot clear the carriage. (The distance is 0.9 inches or so, which means the maximum OD of a gear that can clear the carriage is 1.8″–which implies a 55 tooth gear. That’s because

And while I have two gears that are 52 teeth, my ability to cut blanks sucks. Meaning what I get aren’t circular blanks; what I get are jaggedety things that will inevitably crash onto the carriage. Now I’m sure I can probably reorient the carriage on the Sherline to cut the bigger blanks–but I figured “hey, I have a larger lathe; let’s try that.”

And then I got the first gear, the one on the right in the photo above.

Notice anything about the gear?

Here, let me show you a more detailed image: 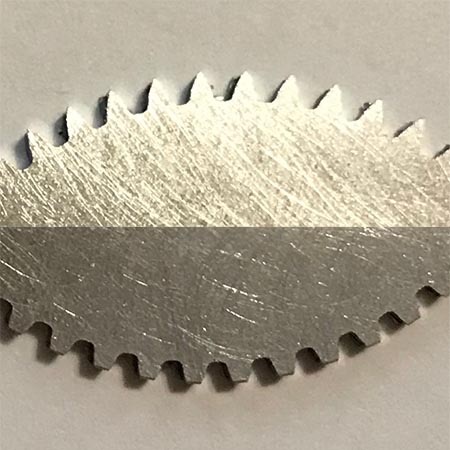 Yep, the teeth at the top are nice and pointy; the teeth at the bottom are flat. That’s because in the process of transferring the gear and mount from the adapter on the 7″ lathe to the mount for gear cutting, the center was not preserved.

This is, by the way, when I pulled out the measuring jigs and discovered that my 7″ mini lathe wobbles. By about 0.005 inches. Combine that with the error in the M3-M2 adapter (roughly of the same magnitude), and that explains the error in the shape of the teeth.

I could bitch about “cheap Chinese crap,” as have many on the Internet–but let’s be serious: I don’t know what I’m doing. Blaming the equipment seems a little premature here. Certainly dismounting a jig from one thing and mounting it on another–unless it’s very expensive, precision equipment that has been carefully calibrated by someone who knows what they’re doing–is probably not going to go very well.

And that tells me not to assume the precision of the equipment I’m using, especially if I need to cut stuff to tolerances of 0.001 inches.

It also probably doesn’t help that I’m using soft aluminum, which, if breathed on strongly, will easily deform 0.005 inches on its own.

Mount the arbor on a four jaw chuck on the 7″ lathe, turn, drill the center, then place in the four jaw Sherline chuck. And yes, the moment you unmount anything from a chuck you will never get it centered again unless you use a lot of fiddling.

It took me an hour to get the wheel centered on the second 4 jaw chuck for turning. Because newbie.

(To be clear, it was centered to within 0.002 inches. Since the teeth are cut 0.0625 inches (2/32 inch) deep, I figured an error of around 3% on the depth of the teeth was acceptable for test purposes. Besides, I’ve been cutting my wheels a hair smaller.)

For centering purposes I used the stepper motor on the rotary table and went back and forth for what seemed like forever.

Then I switched modes on the stepper motor divider (without resetting the device by turning it off and on), and started cutting teeth. And got the gear in the top image on the left.

Here, let me zoom in:

Well, it appears the stepper motor and wheel assembly turned around slightly more than 360° when rotating the circle. Which left me with a useless gear, since the teeth are not cut 360/52 ° per tooth, but slightly more.

And I don’t know if it is because my arbor slipped or because I mistreated the stepper motor/rotary plate. Certainly I should have reset the thing.

So I’m left with a few possible plans for cutting the larger gears.

One is to somehow mount the cutting bit on the smaller Sherline lathe so I can cut the wheels without them crashing into the carriage. Without the carriage there is easily several inches of clearance–meaning I could cut gears with nearly 100 teeth fairly easily.

Another possibility is to build some sort of mount which I can use to mount the Sherline 4 jaw chuck to the larger 7″ lathe and center everything with precision. I’ve ordered a 3/4 16 threaded rod and some hardware to try this option.

Another possibility is to revisit plan two, but make sure the stepper motor and divider have been properly reset by power cycling the whole thing and letting it rest for a few moments. However, I sort of suspect the problem was not the stepper but the possibility that the cutting forces on my arbor caused it to twist in the mount as I was cutting the teeth. After all, my arbor is, well, rather soft aluminum. And cutting teeth certainly is more force than breathing on it.

But all of that is for another day.

On the other hand, I now have a much greater understanding of the shape of the teeth for gears–and now that I’ve gained a superpower in doing animated visualizations, I think I can visualize the math behind the shape of the gear teeth.

That means I think I can also visualize the math for the inner teeth of a planetary gear.

And I may put that together in the following weeks–to help explain why the teeth of a gear are what they are, and so I can rework my Kythera app to do planetary and inner gears.